One of the most rewarding projects my husband and I undertook during our time working in South Africa was setting up an African Wild dog bonding project.

African Wild dogs are a canine that are native to sub-Saharan Africa. They are an endangered species. Only an estimated 6,600 individuals are believed to be left on the continent. They have an incredibly complex social structrures and can create large packs. There populations have been reduced due to a number of factors including habitat loss, human-wildlife conflict and infectious diseases such as canine distemper and rabies.

Working with the Endangered Wildlife Trust our role was to initially build a large boma area on the reserve where we lived. The boma (Large enclosure) needed to be somewhere quiet where the Wild dogs would have as little human interaction as possible. Due to human conflict being a huge problem for the survival of these animals we did not in any way want them to get used to and feel comfortable around people. We found a site at the back of the reserve. This area had no electricty so it was the job of our team to build the fenced area and a stand alone solar supply for the electric fence. The fence had to be electrified to avoid the animals escaping. This was a vast wilderness area and we did not want them dissapearing.

When the first group arrived there was such an incredible buzz around the reserve. We received a small group of males and a small group of females. The two groups were initially kept seperate. They were able to interact with each other through a partitian fence but for now it was our job to observe their behaviour towards each other. Wild dogs live in groups dominated by an Alpha male and female. What we were looking for during our studies, was to see which animals were interacting in a positive way together. An example would be animals sitting either side of the fence next to each other. 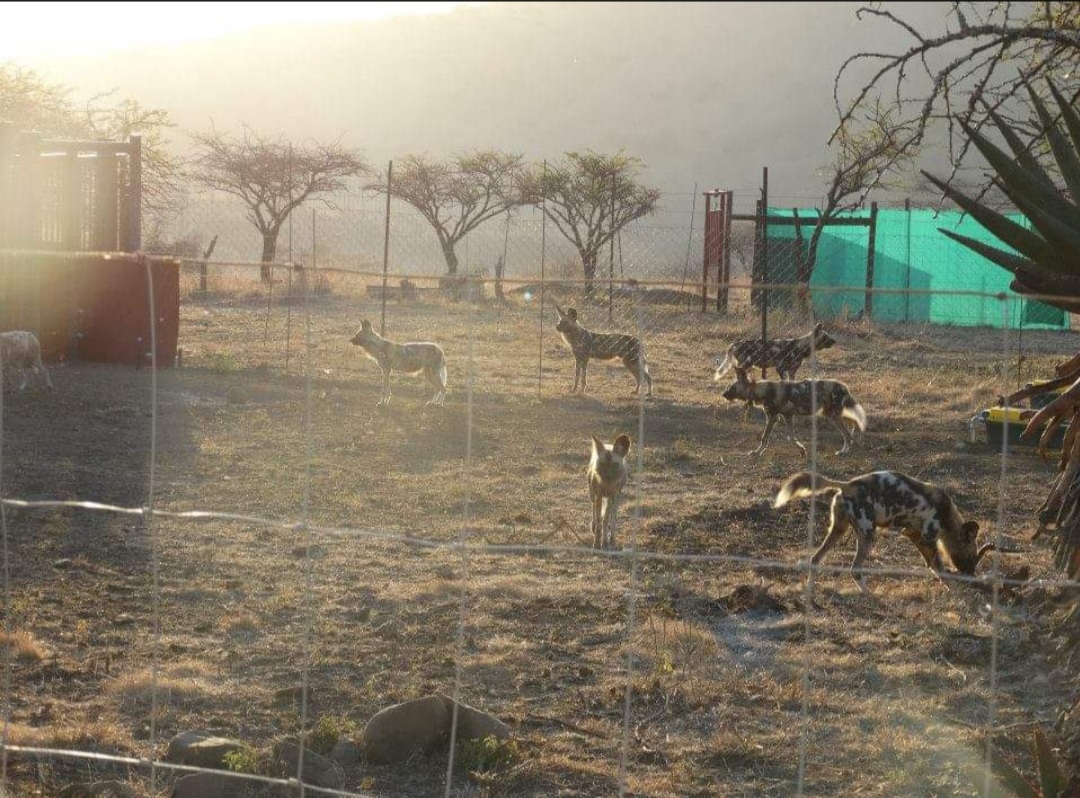 After a number of weeks we had pretty much worked out which animals would hopefully bond well together to create two new packs. The big day arrived when we finally made the decision to mix the two groups. We had no idea how this was going to go. When we pulled back the gate between the two sides we held our breath. The females responded first and this moment was truly magical. They started to jump around and show such excitement. The first male moved into the females area and then it went wild. The vocalisations that these animals make is beautiful. It is a high pitched churping sound not a sound you imagine from a canine.

Finally the last male moved through and there was more jumping and sniffing and excitement all round. We were relieved that all had gone well and now it was time to put our theories to the test and see which animals interacted together. Our observations over the next few weeks confirmed which animals would eventually be seperated to create two brand new breeding packs.

Eventually we had to say goodbye to this group as it was time for them to be released into new wilderness areas and hopefully stay safe and produce lots of little pups. We had a number of groups during our time on the reserve.

This group of Wild dogs in the image above were on their way to Botswana. We felt incredibly grateful to be part of this amazing project and it continues to this day.

If i have seen magic, it has been in Africa.